To illustrate my point… 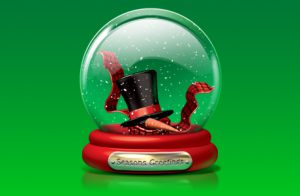 Dancing condoms… no problem, superhero fruit… easy(ish), aliens from the planet psychosis… been there done that! When a project calls for an eye-catching image that might be just a little out of the ordinary it’s time to get illustrating.

NHS Creative’s snow globe is just the most recent in a long line of bespoke illustrations. So just how do I go about creating an illustration?
Once it’s been decided that illustration is the right approach for a project there are many factors to take into account before starting. The target audience, tone, style, time available and techniques to be employed must all be considered. Technique is one of the most important things to consider at this early stage as it is influenced by most of the other factors.

In the case of our snow globe, the choice was straightforward. I wanted the finished illustration to have a feeling of heightened reality. The colours needed to be intense and everything should have a new, shiny and slightly plastic look. Overall I wanted to give my illustration a rich Christmassy glow! Add to this the fact that the final image is to be featured as an animated GIF in an HTML email and digital illustration was the obvious choice.

The snow globe illustration has been created in Photoshop (useful for far more than just touching up photos) and is constructed in many layers. Each of those layers contains elements either drawn directly in Photoshop or created in other programmes and imported into Photoshop. All of these elements are then manipulated, altered and adjusted to within an inch of their lives to achieve the desired result. The process is perhaps best summarised as a combination of experience and serendipity.

The image below demonstrates some of the stages and layers used in creating the illustration.

To see some other examples of my illustration work, take a look at my deviantART gallery.