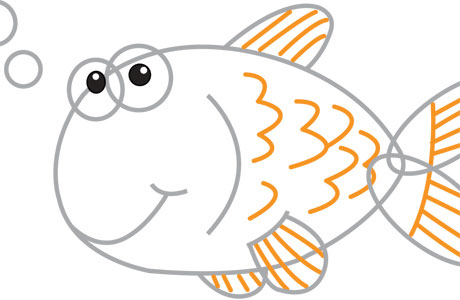 No, this is not a press conference with Eric Cantona. It’s a line used in a presentation for the interview of Volunteer Co-ordinator, inspired by the artwork used in our creative ad to promote the vacancy.

It all began when we were approached by NHS Isle of Wight to produce a creative advertisement to appear in the recruitment section of the Isle of Wight County Press.
The Trust had obtained funding to recruit a Volunteer Co-ordinator, to be responsible for organising, developing and promoting their growing group of volunteer helpers. As part of the brief, we were given the original business case for creating the role. It was one of the Appendices to this document that caught our eye: ‘111 roles for volunteers in health and social care’.
To follow was a mind-boggling array of roles carried out by volunteers, including ‘Games players’, ‘Knitters for premature babies’, ‘Curtain matcher’, ‘Dining companion’, and the inspiration behind our eventual ad: ‘Fish tank maintenance’.
This led us to the headline: ‘Can you look after the people who look after Nemo?’, and of course, an illustration of a rather content-looking fish. The ad then went on to explain the wide variety of roles filled by volunteers that were often overlooked, and yet taken in their entirety, essential to the smooth operation of a busy acute hospital. Here is the final ad: 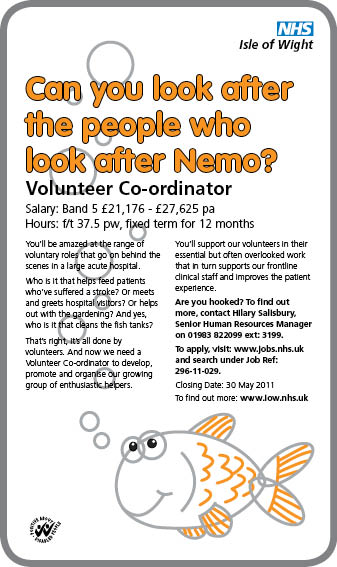 “We were really looking for something that would stand out against the other ads in the publication, and it certainly did that. It was a role that warranted an alternative approach, and the concept behind the ad expertly captured the role in a way that was jovial but also enticing.”

The end result was a staggering 106 completed applications. These were whittled down to six strong candidates. At interview, there was one exceptional candidate who, with a nod to our original ad for the role, summarised his interview presentation with the words: “The Big Society is a coral reef and we are all the fish.” His quote was a reference to a speech by Lord Nat Wei, Government Advisor to the Big Society Agenda, made to the House of Lords in 2010:

“The Big Society policies are about nurturing an ecosystem. I describe this as the Big Society coral reef …it combines the seabed, which is the bedrock of our public services – to protect the vulnerable – and then the coral, which is represented by the many current and future providers of those services. Last but not least is the fish that feed in these waters, the local citizen groups that can extend, vivify and shape this landscape in ambitious, as well as humble, ways. No single part of this landscape can or should dominate, but by working together it comes to form a whole that is more than the sum of its parts.”

So what began as a whacky take on an exhaustive list of volunteer roles, not only promoted the vacancy in a new and creative way, but also became the subject matter for a reference to the Big Society Agenda in a presentation by the applicant who was ultimately appointed.
We wish the NHS Isle of Wight volunteer service all the success for the future, ably assisted by their new Volunteer Co-ordinator.