How GOSH gatecrashed The Games 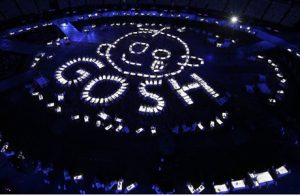 The London 2012 Olympics were protected by some of the most stringent advertising regulations in the history of sport. So how did one NHS Trust manage to slip through the net?

The Olympic Games has long been a battleground for ambush marketers. Just think of the Puma contact lenses worn by Linford Christie at a press conference for the 1996 Olympic Games. Adidas, not Puma, were the official Olympic sponsors at the time.

In a bid to protect the rights of their corporate sponsors, the London Organising Committee of the Olympic and Paralympic Games (LOCOG) set out some of the toughest regulations ever seen at an Olympics. By way of illustration, here are five things you couldn’t (or were not supposed to) do at The Games as a spectator:

But even that did not deter ambush marketers. After this year’s Opening Ceremony, the BBC was forced to apologise after a giant billboard for Dow Chemical was clearly visible through the studio window during coverage of the event. At its peak, the TV audience was 19 million people. The value of such inadvertent advertising was estimated at £2 million. 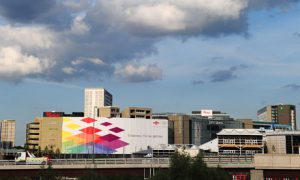 And of course the Olympic Opening Ceremony was not just watched across the UK. The Greatest Show on Earth reached a world-wide audience of over one billion people.

In this context, Danny Boyle’s five minute tribute to the NHS was all the more remarkable. It left many foreign commentators bemused. Diane Pucin, Sports Writer for Los Angeles Times, tweeted after the ceremony:

For the life of me, though, am still baffled by NHS tribute at opening ceremony. Like a tribute to United Health Care or something in US.

The NHS sequence came to a close when more than 300 luminous hospital beds spelt out the words ‘NHS’ and then ‘GOSH’ – Great Ormond Street Hospital, across the floor of the Olympic stadium. Alongside the wording ‘GOSH’, the beds were formed to represent the organisation’s iconic teardrop logo.

And for all the Department of Health identity guideline restrictions on branding for individual organisations, here was a single trust’s brand identity projected across the largest showcase known to man.
If the Dow Chemical stunt on the BBC was worth £2 million, what value this for Great Ormond Street Hospital NHS Foundation Trust? Whilst McDonald’s and Coca-Cola pay £100 million each to cling to the coat-tails of London 2012, an army of ambush marketing experts from Puma or Nike could but dream of such a coup. Money alone simply could not buy you such a space.

We are so grateful to Danny Boyle and his incredible team for inviting the hospital to be involved in the Opening Ceremony for London 2012.

Danny Boyle decided to give the NHS so much emphasis, because he believed it to be one of Britain’s proudest achievements:

Everyone is aware of how important the NHS is to everybody in this country. One of the core values of this society is that it doesn’t matter who you are, you will get treated the same in terms of health care.

Hard work, dedication and commitment to clinical excellence has earned Great Ormond Street an international reputation as one of the world’s leading children’s hospitals. But the trust, and the NHS as a whole, has also earned something more – a unique place in the nation’s hearts. And that’s something no competitor could ever ambush.