The paradox of the NHS trade show 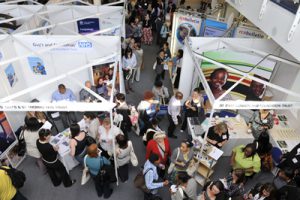 As I walked around the exhibition hall at the Commissioning Show last week, there was one thing that struck me. If the NHS commissioning landscape is becoming a free market, then this must be its trade show.

There were over 250 exhibitors – mostly private sector providers, but of the 19 newly formed NHS Commissioning Support Units (CSU’s) in England, 18 were present. They were all within close vicinity and as the various CSU rivals eyed up their competition across the exhibition hall, it was a stand-off in more ways than one.

Exhibition stand space at the event began at £3,000, and here were 18 CSU’s jostling for the attention of any passing GP or CCG (Clinical Commissioning Group) business leader. Eighteen CSU’s with 18 unique brand identities, plus associated marketing paraphernalia. And 18 Managing Directors projecting their personalities across their business collateral, and in several cases actually present to man the stand themselves. All this, from organisations which have only been in existence at a statutory level for less than three months.

Now don’t get me wrong, it is nothing new for there to be competition in the NHS. But until relatively recently, it was more in the form of local rivalries, similar to the bragging rights between supporters of rival football teams. Fairly low key, and it did not come in the way of partnership working across organisation boundaries, where there was a general consensus of being ‘one NHS’, working together for the greater good.

What I was witnessing here was on a different scale. And with good reason. Everyone recognises it to be a make or break year for CSU’s. Can they prove themselves to the CCG’s they’ve been established to support? Will the CCG’s look to form their own in-house support services, or will they instead commission from neighbouring CSU’s or even private sector providers? There have already been casualties, the list of 21 CSU’s last year is down to 19, with Surrey and Sussex CSU the latest to fall by the wayside. It is expected that more will follow and the need to prove financial viability is intense.

In this context, never before has the role of marketing in the NHS been given such priority. And we’re not talking social marketing. This isn’t about reducing the prevalence of smoking, tackling the rising levels of childhood obesity, or addressing the growing number of inappropriate A&E admissions. In fact, this is nothing to do with targeting the patient at all.
This is business-to-business (B2B) marketing in the public sector, and this was the coalface. Hardly a concept that could have been high on the mind of Bevan when he established the NHS back in 1948.

And yet, despite the upheaval of all the organisational restructures, is it just possible that this new competitive marketplace could provide the catalyst to reforming the system?

There is no doubt that in the frenzy of CSU’s to justify their existence, there’s a danger that sideshows like this conference can actually make you lose focus on the issues which really matter. But at the same time, perhaps it is this very injection of nervous energy into the system, that, if channelled correctly, could provide the motivation for CSU’s to live up to the billing on their marketing material. Namely to make changes, push boundaries, and embrace innovation that helps CCG’s to bring about system-wide improvements.

Time will tell whether this vision for the future will ever be realised, or indeed whether CSU’s in their current form will survive. But in the meantime, expect to see plenty more posturing from CSU’s, plenty more trade shows, and plenty more exhibition stands – as business booms for conference organisers.