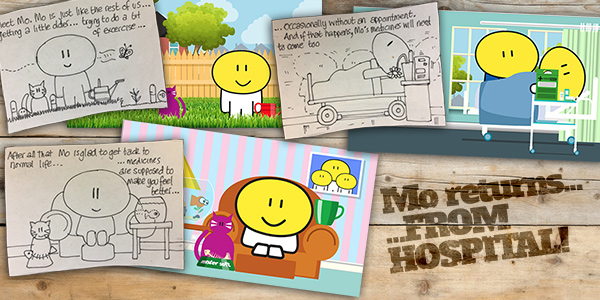 Mo, Mister Soft and Me

in Fun and Games, Recent work

…or how I set about animating the second Mo movie, and took inspiration from a source close to home!

The Meet Mo campaign has been produced to encourage people who may be struggling with medicines to seek help. So far, the first film launched back in September 2017, has been viewed over 20,000 times. You can watch the film – and read about how I set about animating it – here.

It was a lot of fun to make, so when the nice folk at Wessex Academic Health Science Network asked us to make a sequel, I had plenty of ideas about what we could do with Mo next.

We were briefed that Mo should fall ill again – this time resulting in a hospital admission. Spending time away from home can be stressful, and returning home with different or more medicines can also be confusing. Fortunately, help is available from Mo’s local pharmacist, who is able to advise on what the medicines are for, how to take them, and when. And with this support, Mo is quickly able to return to a normal way of life.

And so with the script agreed, I was tasked with bringing Mo to life once again.

I wanted the sequel to engage viewers further with some new details about Mo’s life and some different environments, but it was also vitally important to keep continuity with the first movie. One of the stars of the original film was Mo’s cat, Mister Soft – so positive was the feedback about the cat, we felt it was time for our feline friend to play a more prominent role in the sequel.

It’s probably worth noting at this point, for disclaimer purposes, that none of the characters featured in these films are based on actual persons (living or deceased). The same could not be said of Mister Soft. He is, in fact, based on a real cat. And the cat belongs to me, or more specifically, my wife. Mister Soft is based on Bonnie, our female tortoiseshell rescue cat. She’s two years old and arrived at our house, along with her sister (Willow) just over a year ago. It was my teenage children who nicknamed the cats Mrs Soft and Mrs Fluffy, hence Bonnie’s ‘stage name’ of Mister Soft… 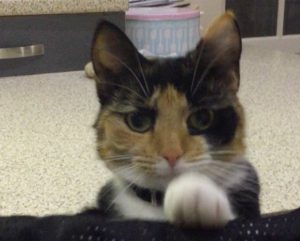 Unlike her sister, who is rarely seen, Bonnie is a home cat whose habits include undoing your shoelaces, eating q-tips and sitting in the (empty) bath. On warm summer evenings as the sun goes down, Bonnie will sit on the garden fence under a streetlamp catching (and eating, I’m afraid to say) moths, which directly inspired the interaction with Mo’s cat and the bee in the opening scene. As a confirmed dog person, I have been forced to admit that Bonnie really is one of the world’s truly historically great cats.

Bonnie kind of evolved into Mister Soft. In the beginning, I suppose I was thinking of cats because we’d just got ours and I thought Mo needed someone for company and also a character that could be adding interest of its own. So, why not a cat – and a purple one at that?

Like most of the Mo movies, Mister Soft is very basically animated, so we need to get emotion and reaction from the slightest eye movement and … well … not a lot else! He’s even more basic than Mo as he is only ever seen from the front. He does, however meow, and he can raise his paws (it’s been rumoured that he can ride Mo’s scooter, but that, I’m afraid, is just a rumour…) 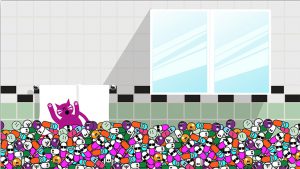 Mister Soft is Mo’s responsibility – one of the reasons for Mo wanting to get better quickly and get back home. And after all, cats are cats; they don’t really get on too well unsupervised with pet goldfish (or rather, they revert to what they really are – predators), so the goldfish scene adds tension and makes us understand the worry Mo is going through. And, of course, it’s a funny scene which highlights the darker side of Mister Soft. 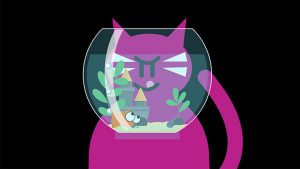 Should ‘Mo III’ be made, be assured the cat will have a role (to be honest, I don’t think I’ll be allowed to leave him out!).
And for anyone worried about the well-being of Mister Soft (or Bubbles the goldfish for that matter), we can confirm that no animals were harmed in the making of this motion picture! 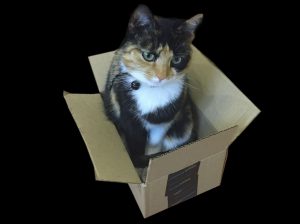 You can, of course, watch the full film here.