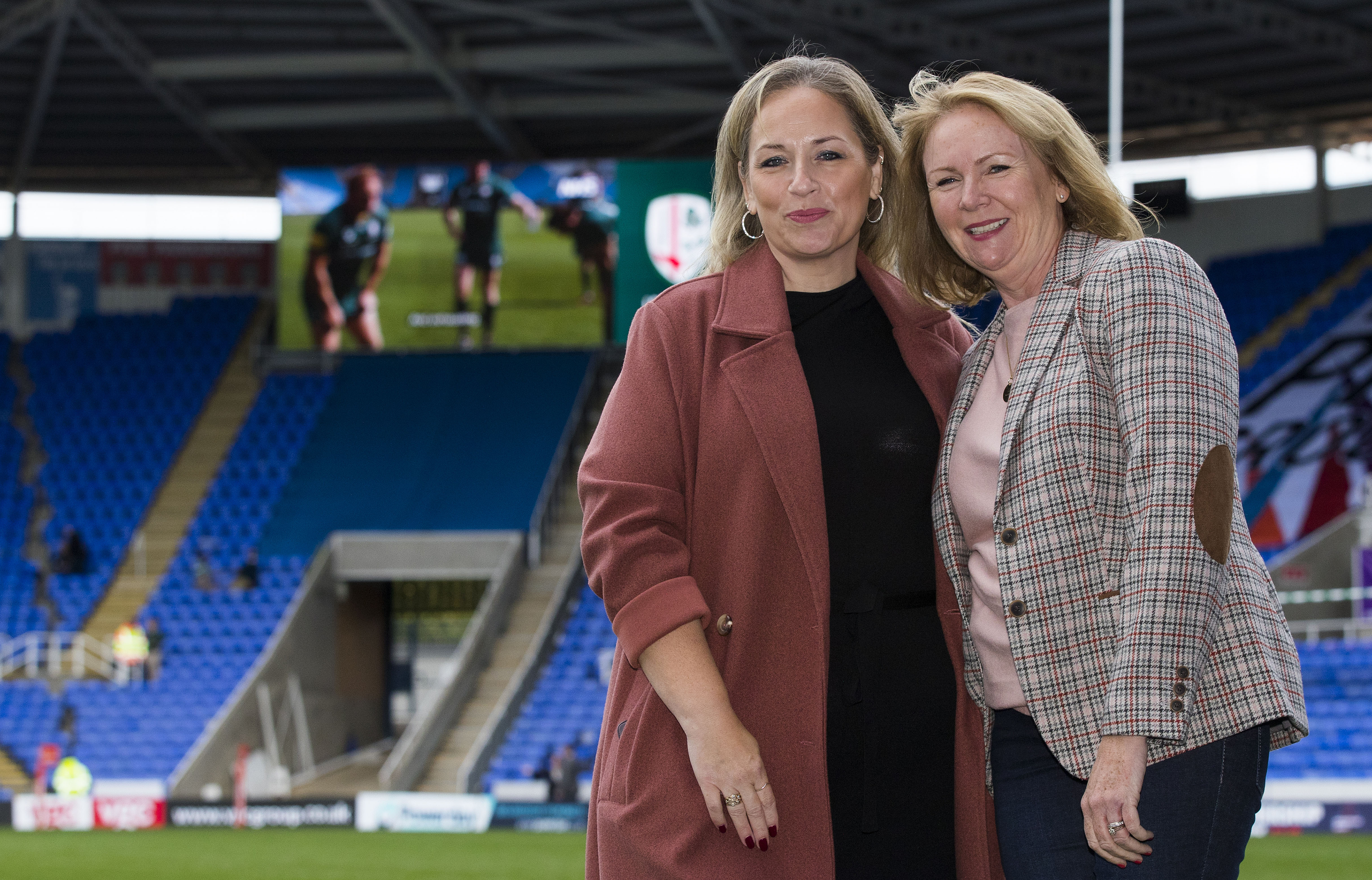 #LiftTheBaby film ensures no nodding off at half-time during Saturday’s London Irish match!

It was great to see our #LiftTheBaby film playing on the big screen at the first home game of the season for London Irish last week.

It was the culmination of a six month project during which as well as developing the LiftTheBaby concept, brand and film, we worked with a range of NHS partners and London Irish rugby club to deliver a truly unique campaign that tackles a serious problem.

More than 130 babies die in the UK every year as a result of unsafe sleeping. If parents fall asleep on a sofa or bed while holding their baby, it can increase the risk of infant death by 50 times. Our task was to convey this message in a memorable and light-hearted way, with a particular focus on targeting fathers. That’s what led us to consider a rugby theme, using the rugby ball as a metaphor for a newborn baby…think Wilson in the film Castaway. Filmed at the Madejski Stadium in Reading where London Irish play their home games, it featured six players from the club and their babies, and was rolled out to coincide with the 2019 Rugby World Cup.

“We approached NHS Creative about our project from an early stage,” said Liz Stead, Berkshire West Clinical Commissioning Group (CCG) Head of Safeguarding Children. “It was clear that in order to achieve a really professional product we needed experts to help us plan, as none of us had any experience of this kind of work. When they joined our task and finish group, the whole feel of the project changed so much for the better – ideas were coming to life, the realities of what we needed to consider became clearly focused. At all times, they were calm and considered, making sure our choices were central to the direction of the project but with guidance on how to maximise their impact. ­­­NHS Creative took the skeleton of our ideas to a level we could not have possibly anticipated and we are absolutely delighted with the product. I would not hesitate to recommend NHS Creative and I am really looking forward to working with them again.”

Debbie Hartrick, Head of Safeguarding Children from East Berkshire CCG said: “So far the campaign has done really well and we are very excited to know that over 40,000 people have been reached via social media and the film is being shown at NHS Trusts and hospital sites across the country. Everyone knows how exhausting parenting can be, so the message resonates very strongly. We would like to thank the London Irish Foundation and the Madejski Stadium, for this opportunity to raise the importance of #LiftTheBaby!”

You can watch the campaign film in full here:

The film had already garnered plenty of media coverage, being featured on BBC South Today, BBC London and the BBC Sports website, along with a host of local press and radio appearances. But there’s nothing quite like seeing the campaign graphics on a big screen in front of thousands of people: 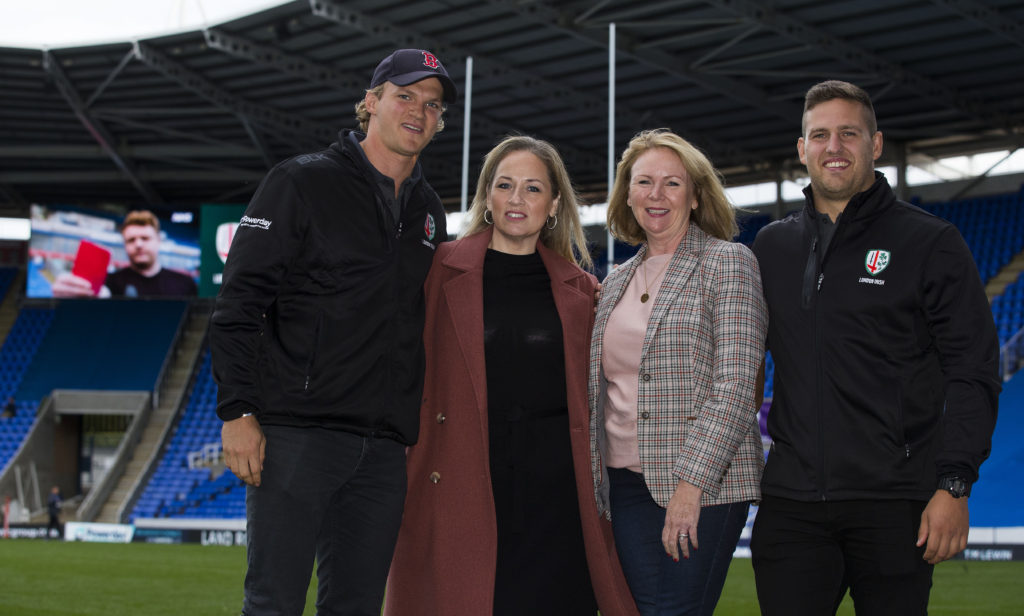 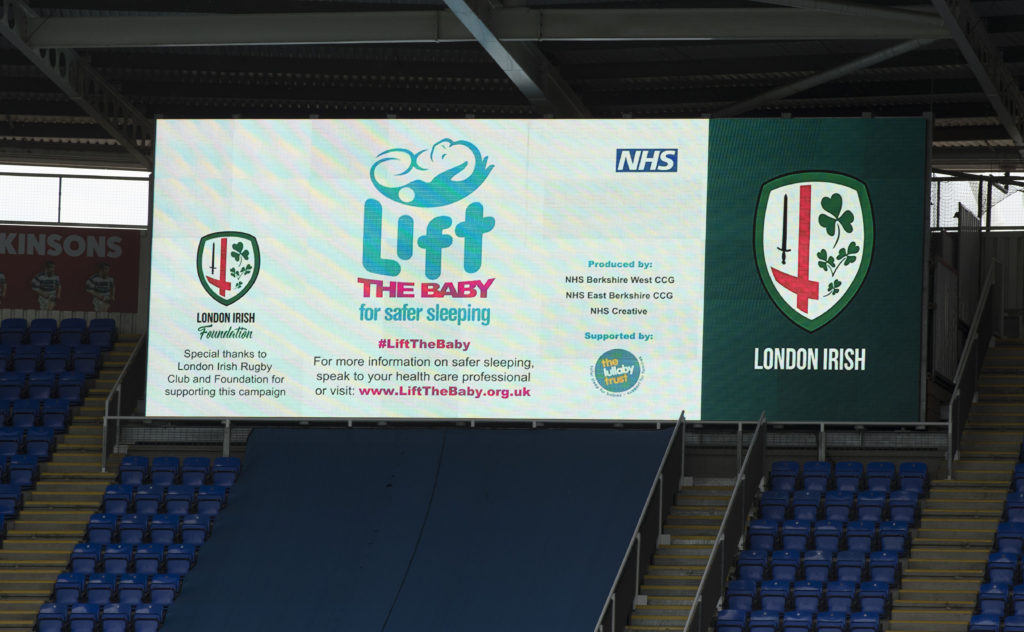 Andy Keast, Chief Executive of the London Irish Foundation, said: “Since we got involved with the NHS on the LiftTheBaby project, we’ve realised as a Community Foundation what an amazingly powerful awareness project this has become. I believe the power of sport can really assist in delivering the campaign’s objectives.”

Watch my interview with Andy below recorded at the end of our filming day:

To find out more visit the LiftTheBaby microsite (built by NHS Creative) or follow discussion about the campaign on Twitter using #LiftTheBaby  You can also read more about how the film was made here.

BLOG UPDATE: We’re very proud to say that this campaign later went on to win Silver at the UK Public Service Communications Excellence Awards 2019. You can read more about that achievement here.