Still no flying cars, but what about Augmented Reality in advertising? 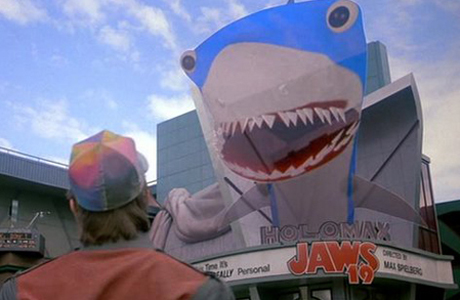 It’s 2015 and Marty McFly is attacked on the street by a hologram projection of a shark promoting the new film Jaws 19. As Marty walks away from the virtual shark attack, he quips: “I still think that shark looks fake.”

It’s one of my favourite scenes from the classic 80’s film Back to the Future Part II. In-your-face advertising that is literally in your face. So now the future of 2015 is almost upon us and I still don’t own a flying car or a hover board, is there any suggestion that the film-makers got it right about the future of advertising?

The launch of a new mobile phone app gives us a glimpse of what a future media landscape could look like, by offering a fascinating link between traditional advertising platforms and the provision of digital content. Blippar is free to download and uses mobile augmented reality to turn 2D into 3D via the built-in camera lens on your phone. Take a look at this example by Tesco, which is the UK’s first newspaper print ad to feature the new technology:

And it doesn’t end there. Any surface can be ‘blipp-able’ – a billboard poster, TV ad, logo, even product packaging itself. The wrappers of Cadbury’s chocolate bars have recently become the subject of a Blippar digital game:

So any time you see the following symbol on an ad, you know what to do, get blipping!

Instructions on how to view an Augmented Reality ad

The widespread adoption of smartphones is leading to a solution to the age-old problem about how to turn initial interest from your audience into direct action. It’s all very well to receive, say, 20,000 impacts (views) of your ad, but standard industry conversion rates are often as low as 1%. Part of the reason for this is the disconnection between seeing a message in one form of media, and the need to then invest the extra effort to actively seek out the follow-up action via an alternative form of media, i.e. to visit a web address. Now add in the three thousand other advertising messages you’ll see during the course of one average day, and you can see why a follow-up action that requires any kind of effort at all might not happen.

So a method of providing follow-up content at the exact time of seeing the ad would be a welcome enhancement to any advertising campaign. Here are a few possible applications for the NHS:

Crucially, in these examples content is ‘pulled’ by the user rather than pushed out indiscriminately by the advertiser. This is a new and innovative way of engaging with your audience that offers more creative possibilities than QR codes.

This is only the beginning of what may soon be possible. Just imagine, if you saw a poster for a long-running movie franchise about a killer shark…you could hold your phone over the poster, and the shark could spring out of it onto your phone and swim towards you as if it were about to attack! And then it could show you the film times at your local Odeon.